TLS extensions expand the SSL/TLS protocols. The extensions have many uses, like adding more features, supporting more scalable patterns or making the protocol more secure. However, adoption has been disappointingly slow until the last few years as the reignited browser wars have kicked client vendors into action. I was unable to find recent statistics about the adoption of TLS extensions, so I went about figuring it out.

There are about 15-20 TLS extensions in specifications. Many however are rarely used, some of the most common and important extensions are:

The adoption of TLS features and extensions is directly tied to the User Agent. While consumer websites and web browsers are important, I believe there has not been significant enough attention focused to Web Service API User Agents. Consumer browsers are now on much faster upgrade cycles, but many servers are not going to follow the same upgrade curves.

For this reason, I’ve collected samples from 3 different data sources:

It seemed too difficult to modify the existing server software to log all of the information that I wanted, and because in some cases the TLS termination is done in devices like a load balancer, I decided to build a tool to decode the information from a packet capture. All of the extensions I am interested in are sent by the Client in its ClientHello message. This means I didn’t need to do any cryptographic operations to decode it, just parse the TLS packet.

I started by using the excellent dpkt library to dissect my packet captures, but quickly figured out it didn’t actually parse any of the TLS extensions. A little patching later and I had it parsing TLS extensions.

The script I wrote handles the common issues I’ve seen, but still could be improved to do TCP stream re-assembly, but in practice with all the captures I made, the TLS Client Hello messages were in a single TCP packet.

If you want to try collecting and analyzing your own samples: 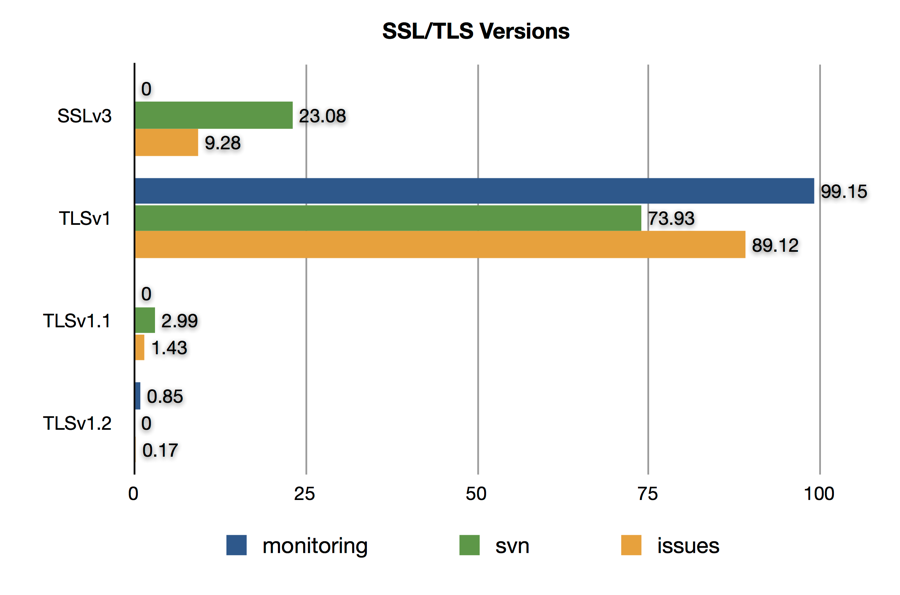 TLS 1.0 is the version advertised by most clients and servers. The version spread for issues and monitoring are about what I would expect, but I was surprised to see that svn.apache.org was still seeing over 23% of its clients reporting SSLv3 as their highest supported version.

While not an extension, deflate compression has to be advertised by both sides in order to support it. If used, it also imposes increased memory usage requirements on both the client and server, so I was interested in seeing if clients are advertising support for it. 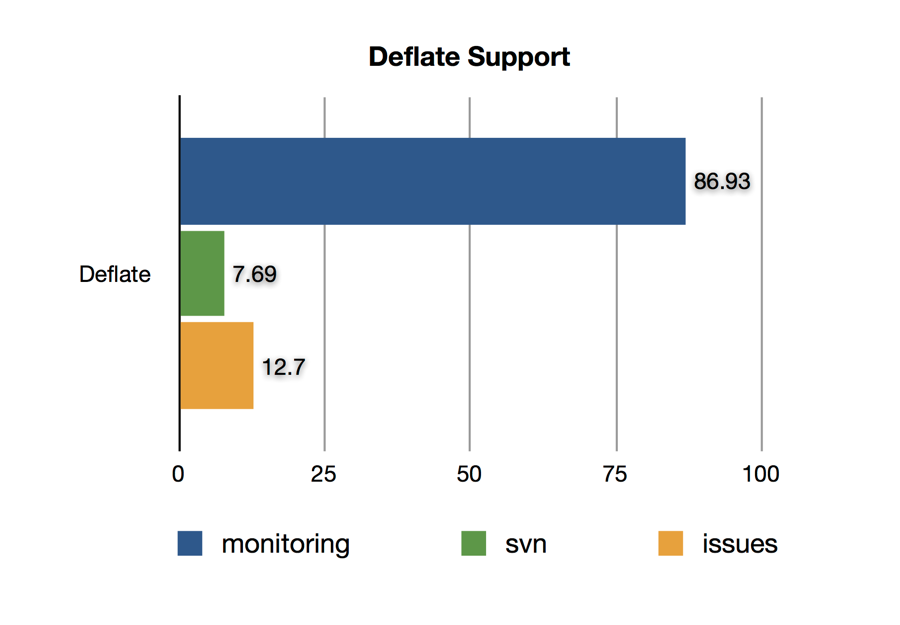 OpenSSL enables the deflate compression by default, and until recent versions it was difficult to disable. I suspect that most of the monitoring traffic is using a default OpenSSL client library, and the more sophisticated browser user agents are explicitly disabling it. Since HTTP and SPDY both support compression inside their protocols, enabling deflate at the TLS layer would commonly lead to content being double compressed. 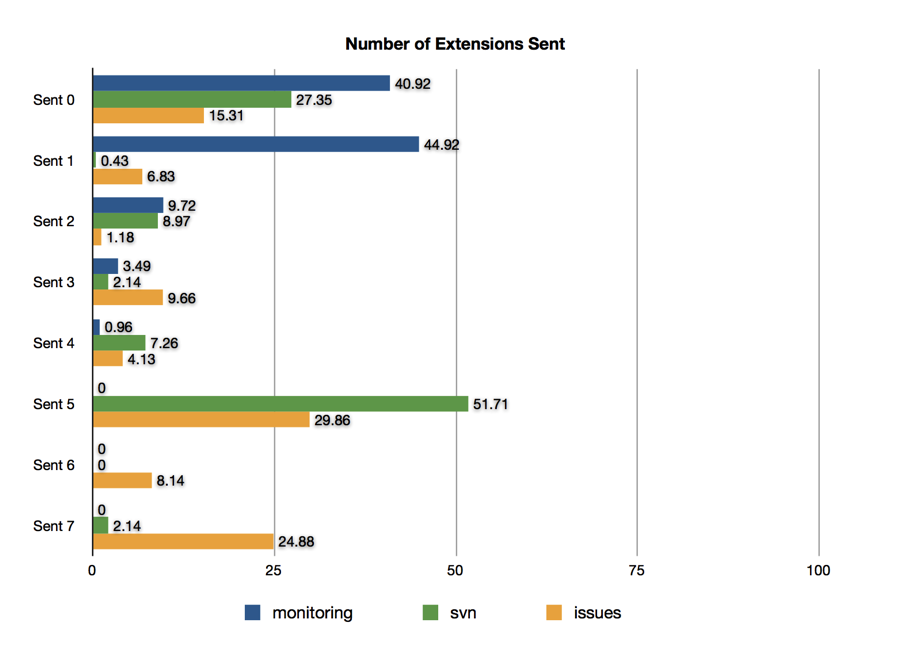 It is interesting that most of the API centric clients send so few extensions. This seems to indicate potentially both the age of the TLS software stack being used, and the complexity of how it is configured by the developer. 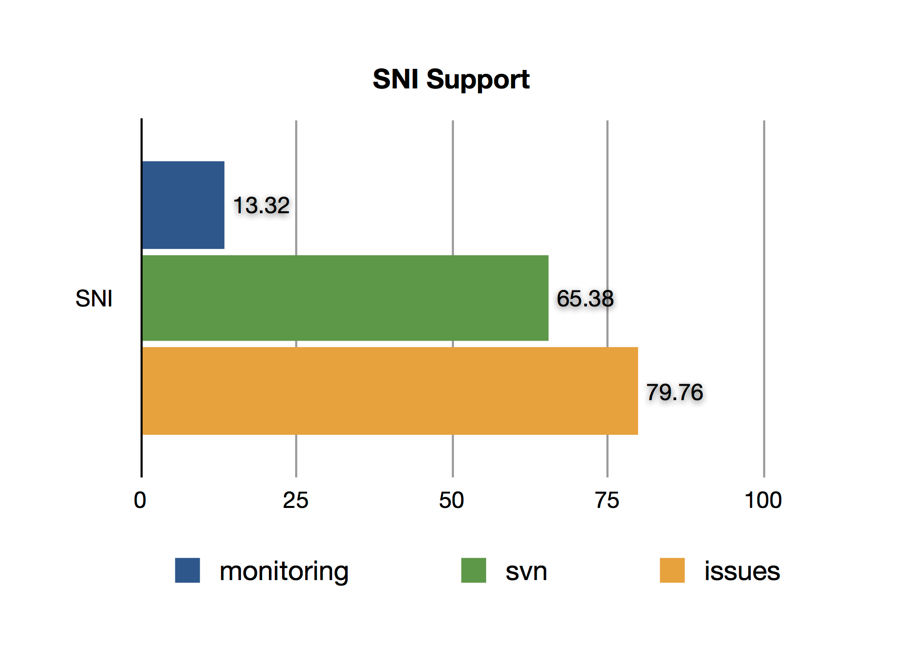 I was disappointed to find a massive gap between consumer browsers and API consumers for SNI. This can be traced to common libraries not setting the SNI extension until recently. For example, only Python 3.2 or newer sends the SNI extension, and because ”Python 2 only receives bug fixes”, it will never be back ported for the most commonly deployed versions of the Python language. 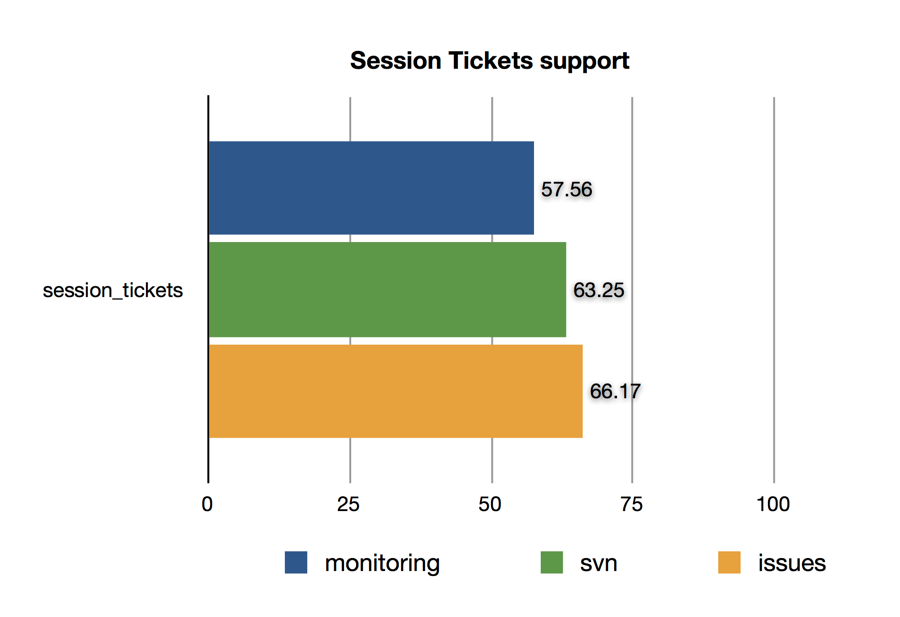 Session Tickets seem to have a more reasonable usage by non-browser user agents, but the consumer browsers are again leading adoption. 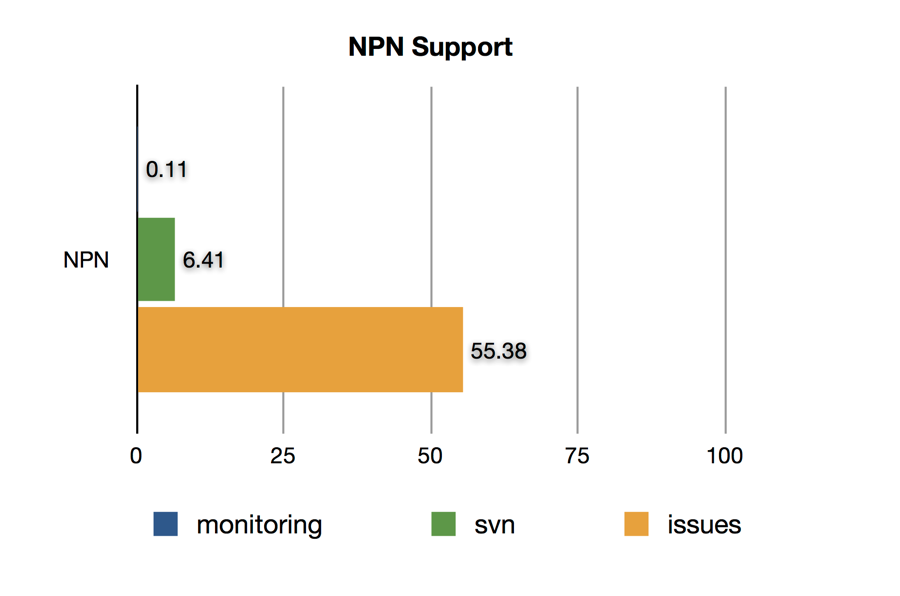 NPN support has been driven by the adoption of SPDY in Chrome and Firefox, so it isn’t surprising that for monitoring we see almost no support from clients. 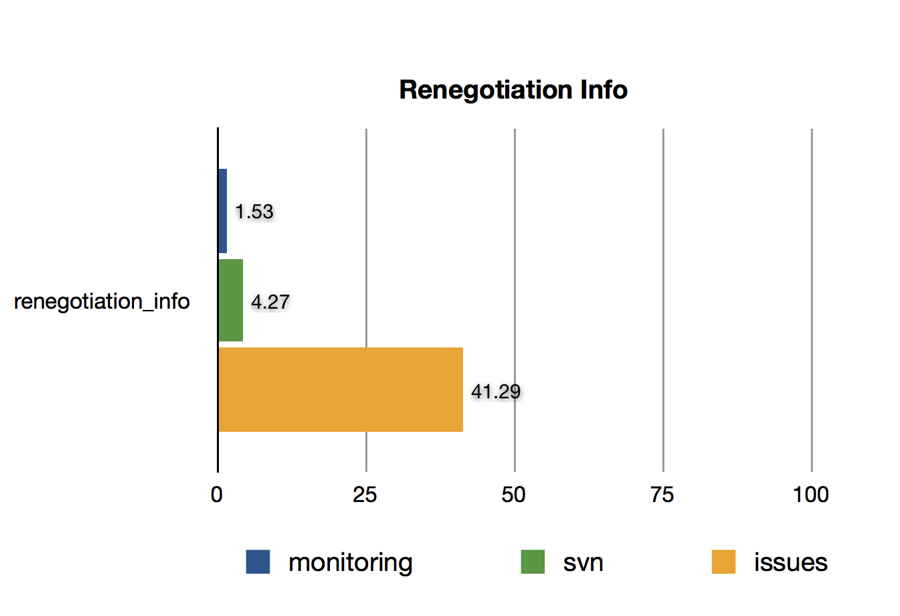 While the Renegotiation Indication extension is sent by a significant number of clients on issues, its use is extremely low both svn and monitoring. This again shows how Browsers are leading the charge in upgrading, but also since the Renegotiation attacks require a man-in-the-middle, it would generally be a lower priority for server-to-server software.

I’ve posted a gist with the raw data for my three samples, if you wanted to look at the information for a more rarely seen extensions.

I think the data I’ve seen so far says a few things:

I think it is great that Browser vendors like Chrome and Firefox are driving the use of newer features and extensions in TLS. It is obvious however that because API clients are commonly built by a more diverse set of developers, and those developers are less specialized in SSL/TLS security issues, that their adoption of the newest extensions is lagging. I hope this could change quickly if HTTP/2.0 and SPDY start driving the need to use NPN, and I hope that this would get developers to upgrade their SSL/TLS stacks.